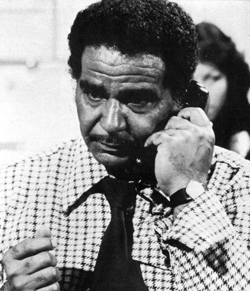 In films from 1950, he labored in bit roles for years before getting noticed in the film One Potato, Two Potato (1964), the story of an interracial marriage. He is best remembered for his role as the brusque, no-nonsense Captain Dobey in the 1970s police series Starsky and Hutch.

Originally cast as “Roop” in the film, Claudine (1974), Hamilton was dropped when Diana Sands, originally cast in the title role, had to withdraw because of illness. Diana suggested that the role go to her friend Diahann Carroll. When Carroll auditioned and got the part, James Earl Jones was cast in the role of “Roop.”

Initially a white actor was cast to play Captain Harold Dobey on Starsky and Hutch (1975). Aaron Spelling and Leonard Goldberg, however, remembered Hamilton, who had already played a police captain in a previous Spelling-Goldberg TV show and thought he provided the right chemistry and balance. Since they already had film on him, Hamilton didn’t need a screen test and secured the part.

Hamilton was the brother of jazz drummer Chico Hamilton. He was also an impresario; since the late 1960s he had run a nightclub/art gallery called Citadel d’Haiti on Sunset Boulevard. Hamilton also produced rhythm and blues and gospel music recordings on his own record label called Chocolate Snowman. One of his releases featured himself; it was entitled ‘Captain Dobey Sings the Blues.’

Hamilton was the divorced father of two children, Candy and Raoul. He had five brothers and one sister, was a collector of antiques, and his favorite sport was deep-sea fishing.