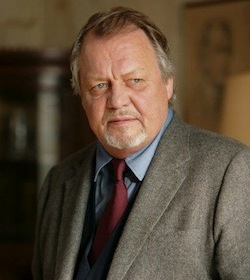 David Soul (August 28, 1943) is an American-born actor and singer and best known for his role as police Detective Ken “Hutch” Hutchinson in the television series Starsky and Hutch; he has since become a British citizen. Soul was born in Chicago, Illinois, as David Richard Solberg. His father, Dr. Richard Solberg, a Lutheran minister, was a senior representative for Lutheran World Relief during the reconstruction of Germany after World War II, and the family moved frequently while Soul was growing up.

Soul first gained attention as the mysterious “Covered Man” on several appearances on The Merv Griffin Show in 1967. Soul then appeared as level-headed Joshua Bolt on the television program Here Come the Brides, and later, Arthur Hill’s law partner on Owen Marshall: Counselor at Law. He has also made guest appearances on shows such as I Dream of Jeannie, McMillan and Wife, Cannon, Gunsmoke, All in the Family, World War III (miniseries), Star Trek, and The Streets of San Francisco. His best known film appearance was opposite Clint Eastwood in Magnum Force.

Soul is currently touring with his latest project, the readings of poet Pablo Neruda.

To learn more about David Soul, visit his official site as well as David Soul Fans.