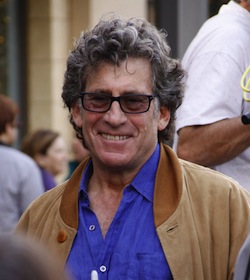 Paul Michael Glaser (March 25, 1943) is an American actor and director, perhaps best known for his role as Detective David Starsky on the 1970s television series Starsky and Hutch. He also appeared as Captain Jack Steeper on the 1999-2005 NBC series Third Watch.

Glaser, the youngest of three children, was born Paul Manfred Glaser in Cambridge, Massachusetts, the son of Dorothy and Samuel Glaser, who was an architect.

Glaser attended Tulane University, and earned a Master’s degree in English and theater in 1966. He was a member of the Sigma Alpha Mu fraternity. He earned a second master’s degree from Boston University in acting and directing in 1967. After appearing in several Broadway productions, Glaser appeared in his first feature film in 1971, playing Perchik in the film version of Fiddler on the Roof. He first gained notice on television playing Dr. Peter Chernak on the daytime series Love is a Many Splendored Thing and made guest appearances on shows such as The Rockford Files.